Fiddleheads has done it again!

Rhiannon Nachbaur, creator and owner of Fiddleheads Violin Studio, received coveted Finalist status for both awards for which Fiddleheads nominated in her city's upcoming 35th Annual Business Excellence Awards. The awards are sponsored by the Kamloops Chamber of Commerce and MNP LLP and the winners will be announced on October 21, 2021. Over 360 nominations were received for this year’s awards.

The impressive categories are the "Environmental Leadership Award" and the "Small Business of the Year."

Fiddleheads is among three fortunate businessses in each category to have selected based on strong merit of the many nominees in a city of nearly 100,000 people. Friends of Fiddleheads are familiar with her many accomplishments will not be surprised to learn these are not her first finalist successes in both categories.

Rhiannon won the "Green Award" at her former town's Shuswap Business Excellence Awards in 2007 and was a finalist previously for the Small Business of the Year Award in Kamloops's 2018 awards. 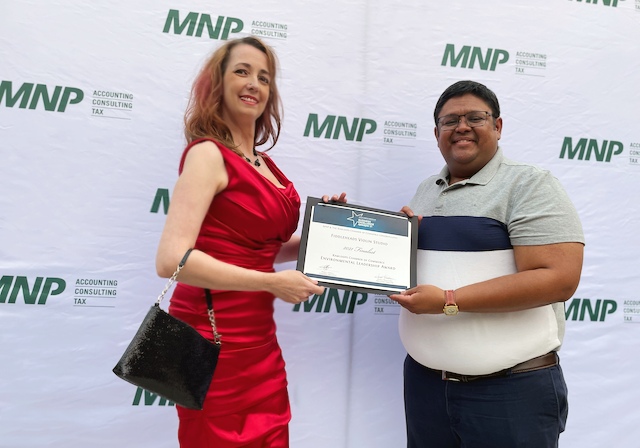 The Finalists Announcement event was held outside Kamloops' Match Eatery due to Covid restrictions, but the setting was far from ideal due to thick clouds of smoke and falling ash from devastating forest fires in the region. Abhinav Ashok, Treasurer of the Kamloops Chamber of Commerce Board, announced the Kamloops Chamber Environmental Leadership Award finalists after he remarked on the deep importance of environmentalism.

The Environmental Leadership Award requires the business "demonstrates a commitment to sustainable practices and environmental leadership" in a range of areas such as:

Rhiannon has operated "the planet's first eco-friendly violin shop" for over two decades and is constantly strategizing and innovating to lessen her operations' impact on our planet. Every component of the business is under "green" scrutiny.

This means everything, from everyday operations to long-term expansion plans, is planned and weighed against environmental impact factors. Be it precisely how her violins are constructed, shipped and stored, to energy and water use at her home-based studio, to her environmentally-focused education efforts, Fiddleheads is a passionate green leader.

[Fiddleheads' extensive Green Policy and Practices can be explored here]

"Just this spring my husband and I made the costly upgrade from our hybrid and higher efficiency ICE [Internal Combustion Engine] cars to fully-electric vehicles," she said. "The incredibly low carbon emissions from hydroelectricity in our region sees both our cars producing only two and a half grams or one-tenth of an ounce of greenhouse gases per kilometer driven."

She went on to explain that, compared to a 2018 Ford F150, with emissions at 256.5 grams (more than half a pound) of emissions per km, switching to electric cars results in a most impressive greehouse gas reduction.

But Fiddleheads' Green Policy isn't just about swapping out costly machines and equipment. The home-based business challenges accepted practices in of her vendors and makers and in business as a whole. For instance, changes to how her instruments are sustainably-built and transported has been challenging in an industry slow to adapt over four centuries.

Even on a personal level, Rhiannon is constantly working to improve her green choices.

"My family eats nearly all vegan meals and we avoid purchasing items with superfluous packaging or those that cannot be reused or recycled. We increasingly reuse things, like clothing, furnishings, and various tools, rather than buying new," she said.

Her and her daughter's fineries for the evening were purchased second hand in their goal to curtail "fast fashion," the mass production of cheap clothing responsible for an estimated 10 percent of CO2 emmissions annually.

"Every choice can make a difference, and it saves money for other things too," she continued.

"More people and businesses are seeing the benefits to greening up, but we can't become complacent. I'm continuing on this path even during economical shifts and Covid limitations. Our beautiful ecosystem is delicately linked to countless other factors, so greening-up is beneficial to health in all aspects moving forward." 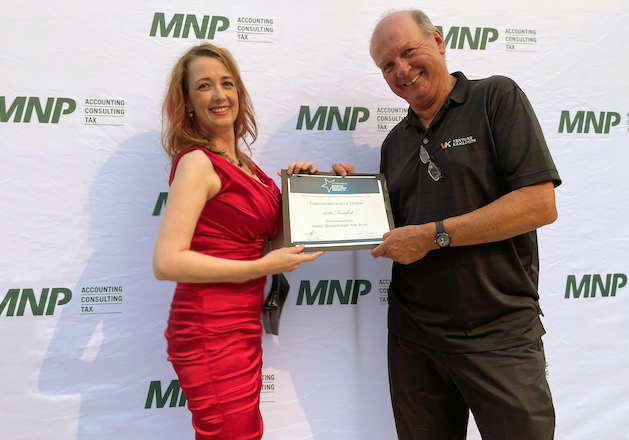 Running One of the City's Top Small Businesses

The presenter of the Venture Kamloops Small Business of the Year Award Finalists and President of Venture Kamloops, Brant Hasanen, also shared his thoughts about struggles for everyone in recent times and how it has been especially difficult for entrepeneurs.

With gratitude in his voice Mr. Hasanen said, "I bring this to you from my heart... and I am sure Mayor Ken Christianson and all of the leaders of the business community and Chamber of Commerce, how much we appreciate you and what you've done though the pandemic. How you've managed. How you survived. Who knows what tomorrow will bring."

The solumn mood perked as he went on to call the three finalists' names for the award, announcing Fiddleheads last: "And we hope they brought their instruments of war to entertain us, Fiddleheads Violin Studio!"

The criteria for this award a non-franchised business, with 1 – 10 full time employees that has demonstrated success through:

Rhiannon was completely awestruck, not expecting to earn Finalist status for this award again and so soon after her a previous finalist honour. She was thrilled to have been nominanted in the first place, but to be a finalist in these two monumental categories was astonishing. She was one of only three businesses in this year's awards to receive this special distinction.

"It's the best affirmation of the work I do to be recognized in these two amazing realms," she said. "Though, to me, any Small Business of the Year really should also be an environmental leader. Business is not just about buying and selling; it's about how we interact with people and the world around us, how it makes a difference to eveyone sharing this planet."

Interacting with people is where Rhiannon shines. As of this press release, Fiddleheads has received a rare perfect record of 120 all five-star reviews for her service, with sixty on Google Business and another sixty on Facebook.

"It takes monumental effort and personal care to see that all my customers are completely happy with my products and service. Shoppers are more educated and more discerning now than ever before, and they have unlimited options locally and online where to spend their hard-earned cash," she said. "I want my customers to have the best possible experience getting the tools for their music."

She continued, "This is why I worked for 28 months on my new website. It's been my vision for twenty-five years to effectively brain-dump all my knowledge into one place so my students and customers can make the most informed decisions with someone they can truly trust. I'm happy to say the feedback has all been enthusiastic and encouraging." 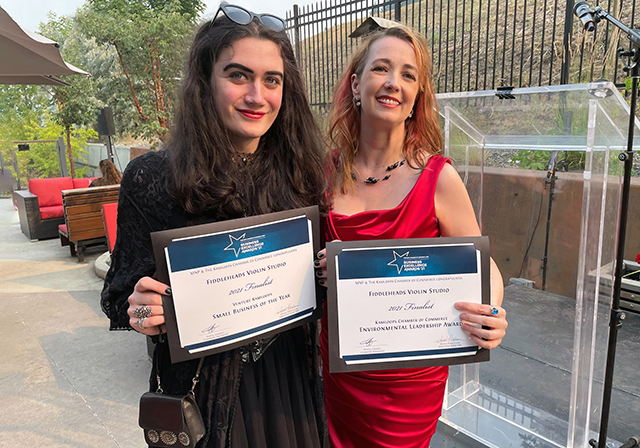 Photo: Rhiannon attended the event with her 20-year-old daughter Lydia

Despite Challenges, Fiddleheads has rocked 2021

It's not just positive feedback boosting the business. Instrument sales have increased considerably since the oft launch, and Fiddleheads, just as it did during the 2008 market crash, again sees resilience and even growth during circumstances that have been cruel to most other businesses. She has the beautiful new website to thank for the increase in sales.

The site, which utilizes the industry leader Magento2 platform, only just soft-launched on June 7, 2021, less than a month after a life-changing surgery.

"I had a chronic case of cholecystitis, a very sick gallbladder, that turned acute and could have killed me," she said. "For two years really all I could do was work on the site as I was too sick to teach or even perform. So while there were fires, shortages, civil unrest and a global pandemic making it difficult to receive medical care, I just kept plugging away at the site. It was worth it, as I knew it would be"

The launch of the site followed by these annoncements has put a new spring in Rhiannon's stride. In fact, the finalists announcement event was the first public event Rhiannon has attended since she saw Lady Gaga perform in Las Vegas in October 2019, during which Rhiannon was already becoming seriously ill.

"I was so sick in late 2019 I had to cancel playing in my orchestras, then Covid shut it all down so no one was playing. Dressing up and going out to celebrate something after all this time felt surreal."

Rhiannon's twenty-year-old university student daughter Lydia, who works as Fiddleheads' assistant in shipping, inventory management and database work on the website, was also in attendance.

"I thought it was important for my daughter to see the results of her and my efforts," Rhiannon said.

"All her life Lydia has grown up attending my concerts, making friends with my students and seeing me working on my business, but it was just mom being mom. Now she is grown up and attending university, so she has a new appreciation for hard work and the changing world around us. I am proud that she can see what over two decades of care and effort can create."

A complete list of finalists and sponsors can be read at the Kamloops Chamber of Commerce's website here. The Awards will be presented October 21, 2021, barring Covid restriction changes.

Below is a Fiddleheads highlight video of the event 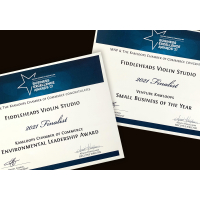 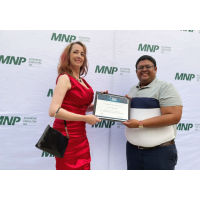 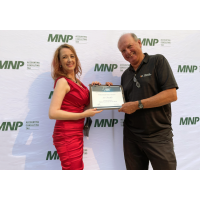 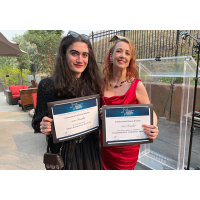 ← Previous Next →
Related Posts
1 Comment(s)
Nishant A. in Toronto, ON
That’s amazing… your [Green Leadership Award and Small Business of the Year] nominations.

I am vegan myself and it was the sustainability label that drew me to your store. Always a pleasure to meet other vegan and eco conscious business owners.