Fiddleheads has the superior-sounding instruments due to many factors, one being our expert setup and diligent testing

To best explain the importance of setup and strings, imagine a sports car.

Setup is the fine tuning of the car, to make sure all the parts are aligned and firing properly to allow for maximum performance.

So, if you imagine a fine vehicle with a burned-out clutch, a loose timing belt, and bald tires being compared to the same model car with specialized improvements, a fine tuneup and performance tires, you get the picture.

I will get into more precise detail about the various components of a proper setup later in this article. [Skip Ahead to Setup Steps]

My Standards, by Rhiannon

As a semi-retired violin teacher and active symphony violinist I have incredibly, sometimes impossibly (ask my makers) high standards. My extremely high standards carry over into Fiddleheads in the products we sell, my commitment to service and how I maintain my and the business' sparkling reputation. I say I’m semi-retired only because between running my shop and playing in 3 orchestras I can’t teach 40+ students anymore.

All my violins (also violas- for brevity I will talk about violins) see at least 2 hours of detailed adjustments after the instrument is crafted. I start by inspecting each and every violin as they arrive from my many makers. Next my luthier adjusts the various components to ideal measurements and specifications. Once this work is completed I inspect and play the violin to make sure everything is just right, and if it isn't, back on the luthier bench it goes!

It goes without saying my ability to play the violin at a professional level, mixed with over two decades of teaching hundreds of students, puts me at a great advantage to the other shops in my understanding of what players want and what my instruments deliver. Add to that my personal involvement with my makers and familiarity of each and every single instrument I have in stock.

I'm not just selling fiddles out of a catalog, and I am not selling every possible brand I can get my paws on. I have narrowed down the choices to the best violins at each price point so you can trust that the instrument you are buying is right for your needs and budget.

This may sound like bragging, but I have solid facts and customer testimonials to back up my claim. Fiddleheads has won several business awards, including a coveted finalist position as Small Business of the Year in my city and our reviews and testimonials are consistently impeccable.

I'm a busy woman. I play in three orchestras (two as Concertmaster), teach only a couple students here and there for the enjoyment of it, and run a hopping violin business I created from scratch when my now-adult son was a baby.

I'll continue to use the car analogy because we have all been affected by winners and lemons from the automotive industry.

No one would do an entire engine rebuild and install a racing clutch and performance tires on a rusted out Ford Pinto with 400,000 miles on it or a Chevy Corvair without an engine or wheels. That's universally known as throwing good money after bad.

Unless you are a mechanic who enjoys repairing your failing vehicle weekly, it's better to invest your time, energy and money into the most solid vehicle you can afford and which is worthy of the repairs that will give you years of enjoyment. You don't want to deal with a money pit that doesn't make much of a difference no matter how much money you sink into it. Even a mechanic gets sick of working with Pintos and Corvairs and would rather invest time into a vehicle worthy of the time, money and emotional investment.

Understanding this concept in the violin realm is precisely why I do not carry garbage beginner violins like you will see at nearly all the other violin shops. Sure, it's effortless for anyone (literally anyone) to sell $99 junk violins by the hundreds. I know from experience during Our Brief Endeavour in the Budget Violin Market from late 2009 to early 2015. 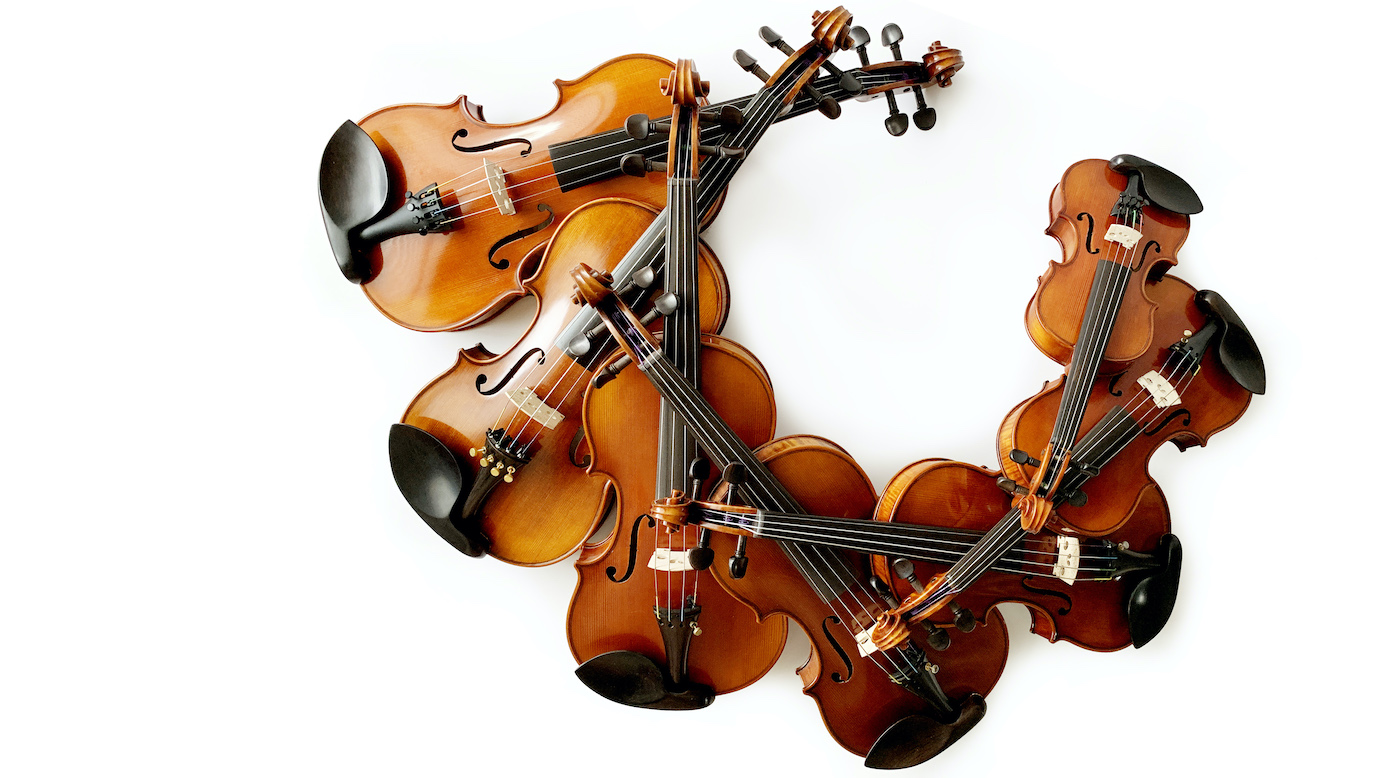 Fiddleheads' Student Violins and Beyond

My business' product line consists entirely of violins I am personally proud to sell, not a single lemon or so-so instrument. They are all fantastic in their own price points and ranges.

For example, Fiddleheads' entry level violins (VN-100 model) are custom-commissioned for me by the workshop of Mr. Sun, who has received impressive accolades in the Violin Society of America's International Competition. These and the other Fiddleheads 100-series Sun violins (and 200-series violas) are all at a quality level I am entirely confident to see my own students playing, depending on their skill level.

Like all the instruments I sell, my Sun violins are worth investing my time, energy and money both in how they are constructed and how I see them meticulously setup and carefully tested. This results in a noticeable difference between the Sun violins other shops promote and my superior models Fiddleheads sells. Keep that in mind when you're comparison shopping.

The same, of course, can be said of all the instruments I sell. I refuse to settle for mediocre quality or commonplace products or many other sellers slog without question. Each and every violin of mine is inspected, played, tested, further setup and tweaked. I get to know all my violins like I get to know my customers. This is all unequivocally apparent in the reviews and testimonials my business and I receive.

Steps to Our World-Class "Fiddleheads Setup" 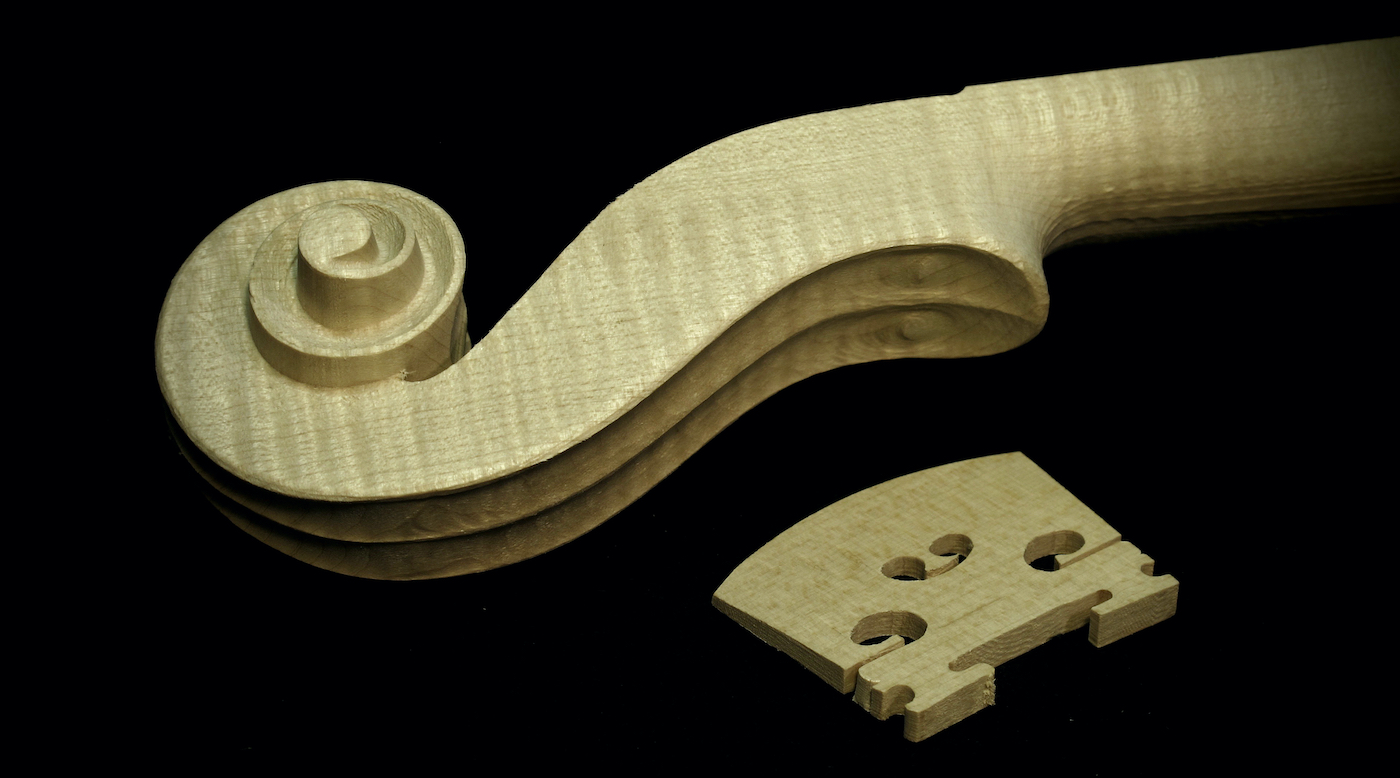 We start by using only quality bridges made from hardest, seasoned maple. Compromising with a cheap bridge is a waste of all the time that goes into its setup.

The net effect is a more refined looking bridge and greatly improved tone as surplus wood is removed from key points where it matters to a player, and not just by the book.

Likewise, the sound post is made from high calibre spruce. It is next cut and fitted in place, with a new one being cut if it is too short for the prime positioning. Then it is moved and adjusted until it sits in just the ideal spot for optimal tone. 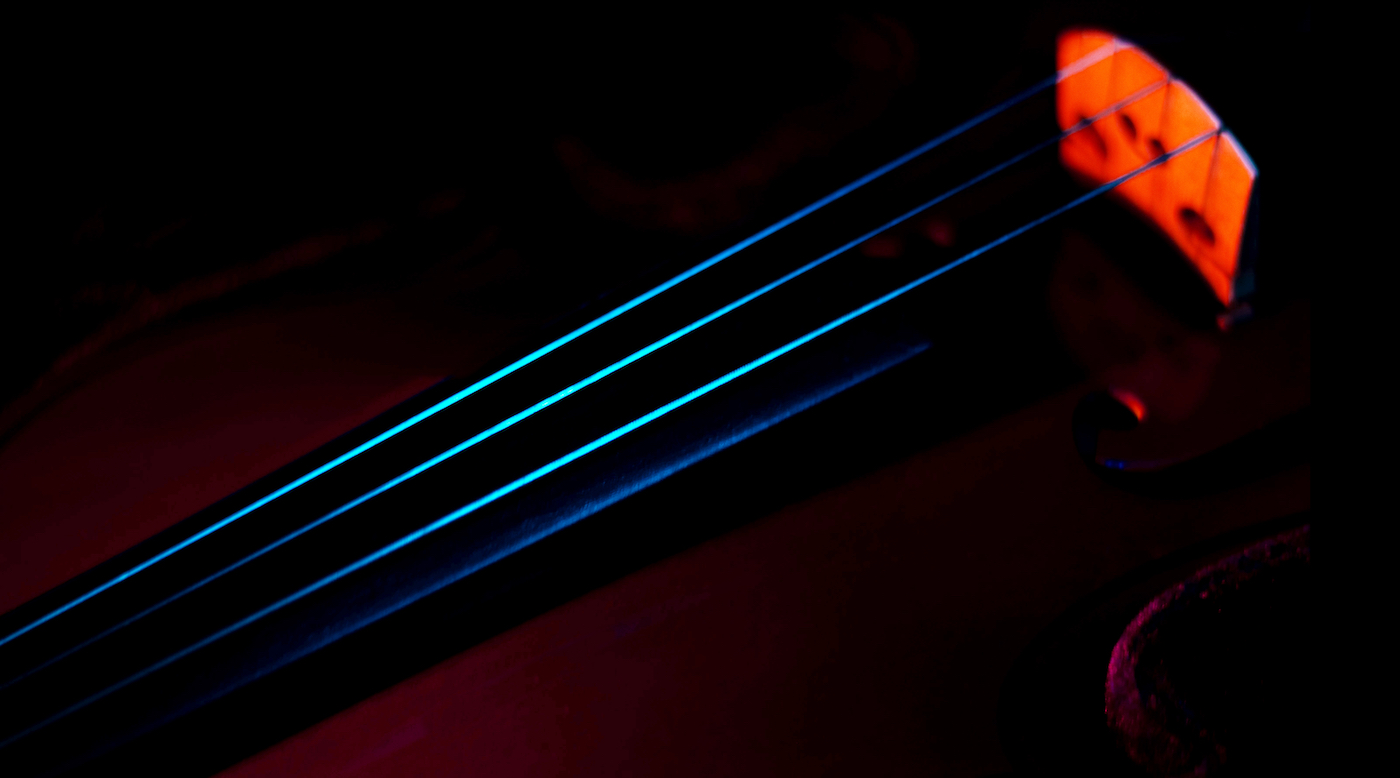 Strings breathe life into an instrument. Combined with proper setup, this is what makes the biggest improvement to a violin's sound after the initial construction. These two factors go hand in hand. There's no use throwing good money after bad by putting cheap strings on a quality violin, or quality strings on a cheap violin or one with bad setup.

Most beginner violins sold elsewhere are setup with "factory" (those provided by most makers) stock steel or other all metal strings and though they are cheap to produce, the sound is dreadful. Consider this: cheaping-out on strings is akin to putting cheap, low-octane gasoline full of particulates into a performance engine.

All of the strings Fiddleheads use were carefully chosen by me to have the best properties for the price. I use only European strings (with the exception of D'Addario viola strings from the USA, which originated in Italy) since these are still the best available, no matter what others may claim.

Below is a list of the most standard strings we use on nearly all of Fiddleheads' instruments:

Yes, you read that right. Strings need to be replaced from time to time. Manufacturers suggest every 6 months, but most students and amateurs can get away with changing their strings every 6-12 months. I try to get the most sound and time possible out of my Evah Golds, but changing them every 6 months is my practice as I play a lot. I especially tend to change them out before any notable solos I have with my two concertmaster roles. 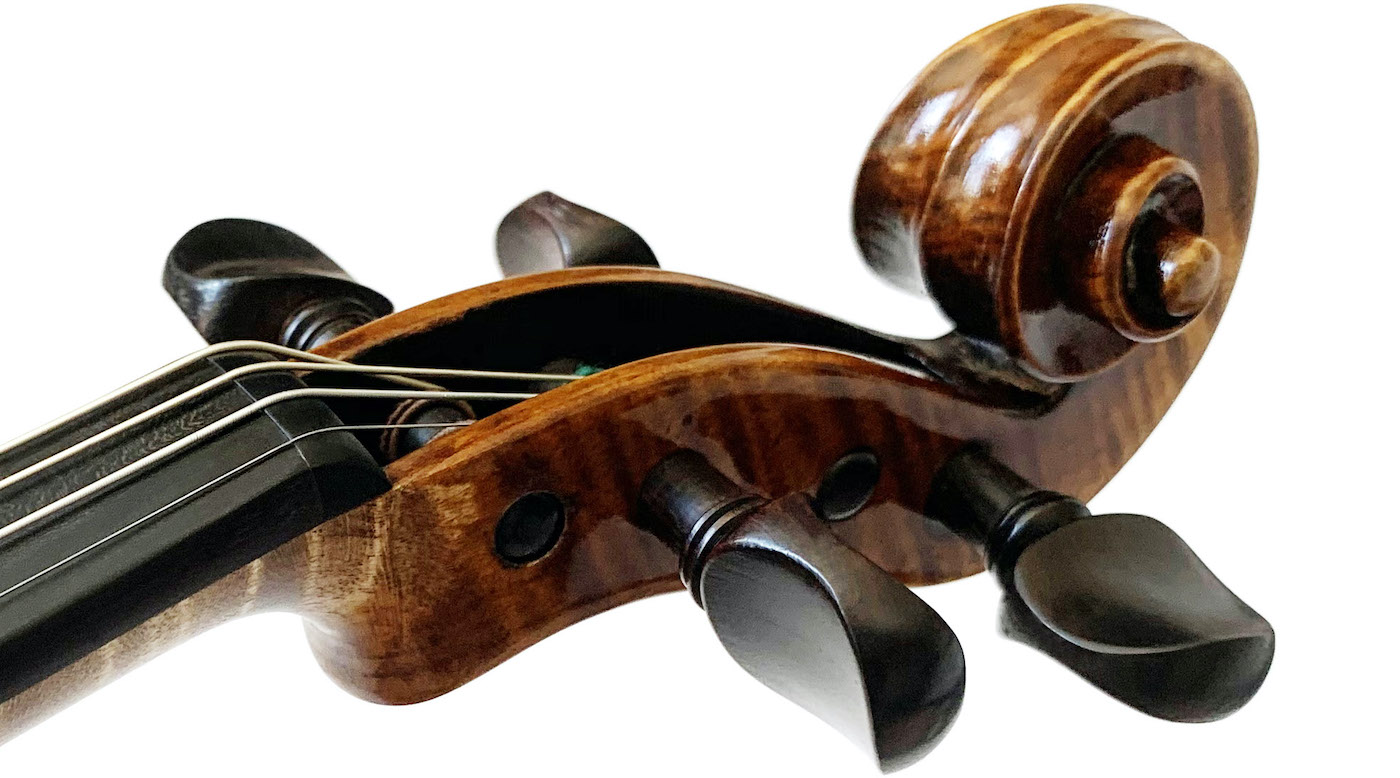 The pegs are shaped as to rest just inside the peg box: not sunk in too far and not jutting out the box more than a few millimetres. They are also lubricated as to turn smoothly, making peg tuning far easier.

Sometimes the wider gauge string requires more room in the peg box to wrap around the peg. The peg box is carved and re-stained to accommodate thicker strings. 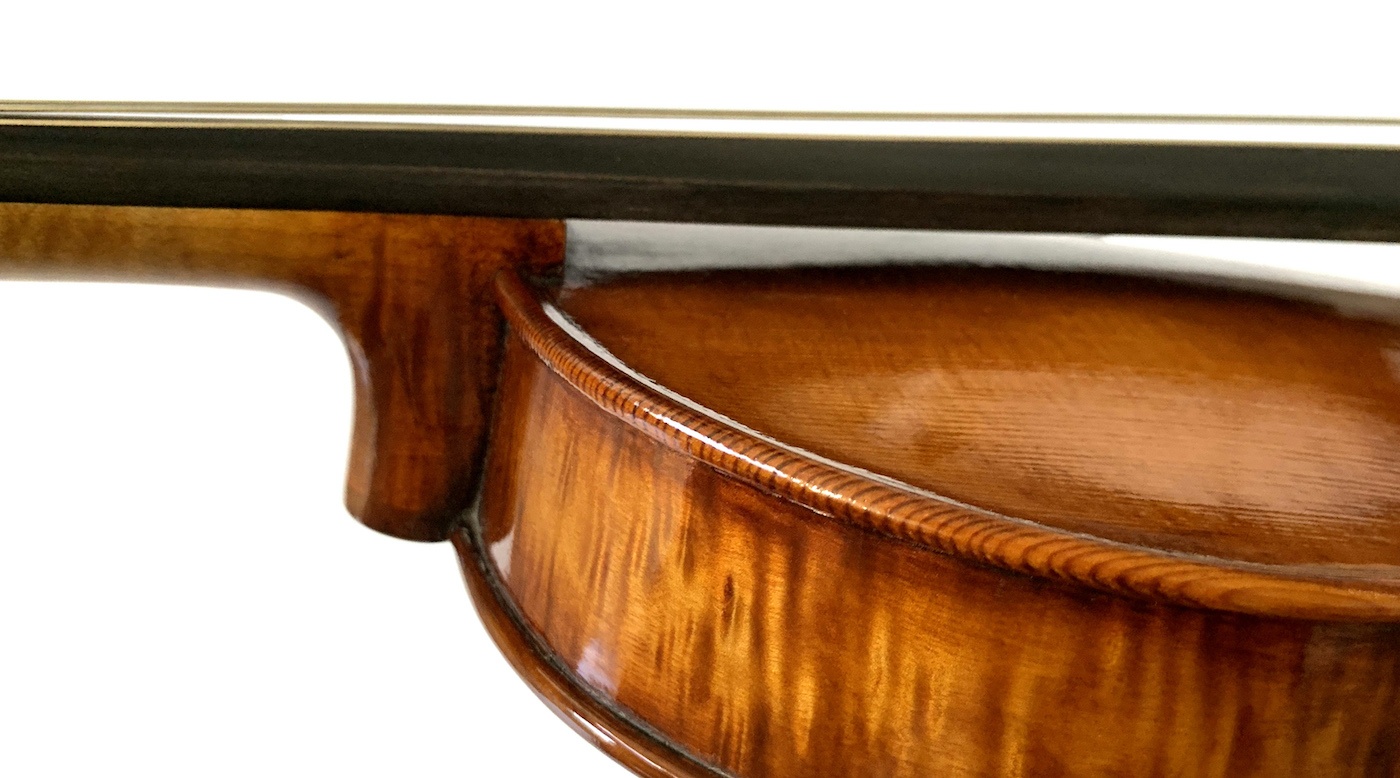 4. The Fingerboard and Neck

The nut has the grooves spaced, lubricated and filed appropriately. The strings will not catch in the grooves and this eliminates premature string breakage.

The fingerboard is shaped for best settings in several places: relief, projection and string spacing. The side of the fingerboard and back of the neck is also gently filed and sanded, as needed, making the surface smooth under the hands. This makes for smoother shifting and less edges to catch on. And it just feels better in the hand.

When necessary we apply a coat of protective, and safe, violin preserving oil on the fingerboard and a most subtle coat of protective shellac on the neck. Sometimes two coats are needed depending on the rate at which it is nicely absorbed into the wood. 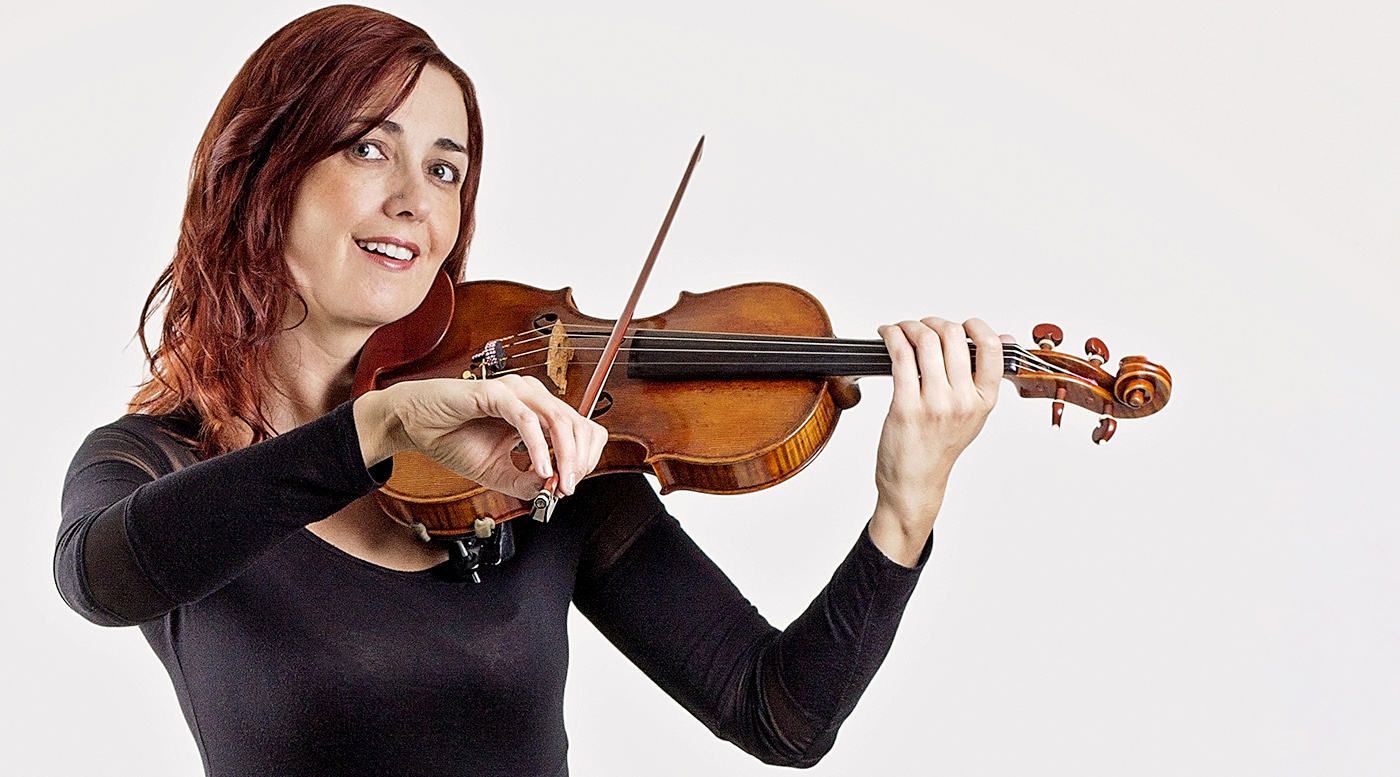 Any varnish flaws are touched up where possible then the violin and fittings are polished.

Other small details are looked after as they arise and we never skip steps or cut corners, aside from some violins which are simply discounted in price to meet customer demand. Yes, there are frequent requests for discounted violins with slight flaws and we honour these requests as we can.

The whole time the instrument is measured and tested/played to confirm optimal setup and adjustments are made as needed. I personally test each and every violin before it leaves my studio, sometimes doing this many times until it is just right.

My final testing step is certainly something I know you will not get anywhere else you shop. Its one of the many perks in shopping with Fiddleheads and something that has earned us so many reviews and testimonials, loyal customers, and referrals.

If you haven't noticed by now, I'm a total detail person and there's so much more be discussed, but I'm confident this rundown will give you an understanding and appreciation of the attention to detail, level of care and expertise and overall thought that goes into setting up each and every one of our instruments we provide to our customers.

Any questions, please use the contact link at the bottom of any page on this extensive site. Thanks for reading!